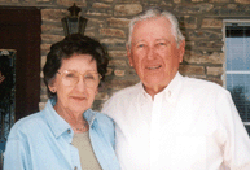 Doris Whitworth and Robert H. Kensing '46 are giving the gift of a lifetime. Successful in their respective careers, the couple focused on investing their earnings wisely. Those financial decisions have allowed them to live their lives the way that they wanted-and to establish a charitable gift annuity through the Texas A&M Foundation.

Robert Kensing: "We decided to give tax-exempt bonds, and the remainder will be used after our lifetimes to support endowments that memorialize two faculty members who nurtured my interest in agricultural economics and pecan culture: Ty Timm, who was the head of the Agricultural Economics Department; and professor Fred R. Brison '21 with the Department of Horticultural Sciences."

The annual distribution from these endowments will be used by the leadership in the Departments of Agricultural Economics and Horticultural Sciences to benefit students and faculty.

The Kensings' gift is in recognition of Texas A&M's influence on both of their lives. Robert earned a bachelor's degree in agricultural economics in 1960. Both Robert and Doris returned to Texas A&M later in their lives to earn master's degrees. In addition, Robert was an economist for 26 years with the Texas Cooperative Extension Service, which is part of The Texas A&M University System.