Gift of I R A Takes Flight 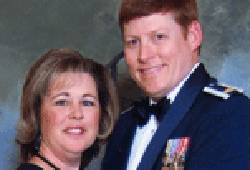 Class of '82 couple will help Aggies create flight plans for their future through planned gift.

Dr. Dale Cope '82 describes himself as an aircraft psychologist. As a program manager with Southwest Research Institute in San Antonio, he carefully analyzes aircraft structures to determine how long they will last or why they might have failed during a crash. Cope, who recently retired from the U.S. Air Force, manages multidisciplinary research programs for the institute's Mechanical and Materials Engineering Division. This painstaking attention to detail is why he and his wife, Karen (Smith) Cope '82, have decided to make a planned gift to the Texas A&M Foundation on behalf of Texas A&M University.

Dale Cope: "You realize there's no guarantee that you'll make it to a ripe old age. But with a plan, nobody will have to guess what you want done with your estate. It's easier on the family members who are left behind."

Dale Cope: "Once we chose not to have children, we felt that giving to the Foundation is the best use of our estate."

Dale originally chose Texas A&M for the quality of the aerospace engineering program and the Air Force ROTC, while tradition guided Karen's decision-her grandfather and father each earned the Aggie ring. The Copes met as freshmen, but Dale didn't get the courage to ask Karen for a date until their senior year. They married in College Station in 1984, with his Air Force ROTC unit performing the saber arch at the wedding. Since then, the couple has lived in California, Missouri, Ohio, Oklahoma, Colorado and Kansas.

Dale earned a master's degree from the Air Force Institute of Technology and a doctorate from Wichita State University. Karen, whose undergraduate degree is in floriculture, primarily describes herself as fulfilling the role of a military wife, although she worked in several professions, including landscape design and surveying. At each location where they've resided, the couple has sought out local A&M clubs. These ties to the university have reinforced the Copes' philanthropic decision to give to the Foundation.

Karen Cope: "Giving the IRA to the Foundation is a way to better the world. To us, Aggies make the world better."